NC-based Chimerix getting plenty of attention as monkeypox spreads

Here are the Bay Area’s highest-paid CEOs in finance

The FHA has announced it will cut mortgage insurance premiums, a move that may ease the burden of rising interest rates

Federal Reserve officials said they would begin running off their $4.5 trillion balance sheet “relatively soon” and left their benchmark policy rate unchanged as they assess progress toward their inflation goal. 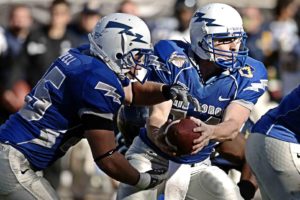 The start of balance-sheet normalization — possibly as soon as September — is another policy milestone in an economic recovery now in its ninth year. The Fed bought trillions of dollars of securities to lower long-term borrowing costs after its policy rate was cut to zero in December 2008.

Fed watchers anticipated that the inclusion of the term “relatively soon” would signal the Fed could announce the timing of their balance-sheet reduction program at its meeting in September.

The Fed said, “the committee is monitoring inflation developments closely.”

Another Increase
U.S. central bankers have raised the benchmark policy rate four times since they began removing emergency policy in December 2015 and project another increase before the end of this year.

In June, the FOMC outlined gradually rising runoff caps for maturing Treasuries and mortgage-related securities, and said the program would start “this year.”

Fed Chair Janet Yellen has allowed the labor market to strengthen while inflation has remained lower than their 2 percent goal, with price pressures declining in recent months. The target range for the policy rate was held at 1 percent to 1.25 percent.

Wednesday’s statement highlighted that a period of weak inflation continues. “On a 12-month basis, overall inflation and the measure excluding food and energy prices have declined and are running below 2 percent,” the statement said.

Unemployment, Inflation
U.S. unemployment was 4.4 percent in June, below the Fed’s 4.6 percent estimate of full employment. Inflation has missed the central bank’s target for most of the past five years. The central bank’s preferred price measure rose 1.4 percent for the 12-month period ending May.

The FOMC retained language that it expects to keep raising interest rates at a “gradual” pace if economic data play out in line with forecasts.

“The committee will carefully monitor actual and expected inflation developments relative to its symmetric inflation goal,” the statement said.

The vote was unanimous.

The U.S. Commerce Department will release second quarter growth data on Friday. Economists surveyed by Bloomberg expect the economy to have rebounded to a 2.5 percent annual growth pace, from 1.4 percent in the first quarter.

Next Many lenders are loosening requirements for prospective home buyers

5 Tips To Avoid Personal Finance Trouble When Buying A Home

Denver third-best city for retirees in US, says new study

Denver vs. Charlotte: How the Super Bowl 50 cities match up (Slideshow)

Many Americans qualify for more than they can handle. Tips to avoid that trap.

VCs raise massive amounts of capital in Q1, but back fewer startups