Does it matter that Wells Fargo’s new CEO is based in N.Y.?

How to land a plum commercial brokerage job in Portland

Charlaps to take a stand on Elmwood Avenue

JPMorgan Chase retains top spot among U.S. banks; still No. 1 in the Valley

We’ve had a long run on the current economic expansion, but eventually, another recession will come. A lot of people will lose their jobs, maybe including you. So ask yourself a question: When the time comes, would you rather take a guaranteed 10 percent wage cut, or have a 10 percent chance of becoming unemployed?

Unemployment, particularly prolonged unemployment, is one of the worst experiences someone can have; it is one of the few forms of unhappiness from which people don’t really recover, at least until they get another job.

So it might seem as if the decision should be easy: accept the small, sure reduction, instead of the enormous loss. And yet, this is the opposite of what we see. Employers are the ones making decisions, not workers — and they seem remarkably unwilling to reduce wages during a downturn. Instead, they are apt to use layoffs to control their labor costs.

This is a mystery that economists refer to as the “sticky wages problem.” Even though most people would probably be better off with less unemployment and lower wages, we can’t seem to get to that happy result. Instead, we get deeper recessions, as people out of work are left with no purchasing power at all, and the people in work sharply reduce their spending out of fear that they, too, may soon be broke and unemployed.

Nor is that the only place in which we see prices sticking to the wrong levels, and causing major economic headaches. A recent article in the New York Times detailed a phenomenon that will be familiar to many an urban dweller: Soho storefronts going empty because landlords refuse to lower the rents. Presumably, the landlords are worse off than they would be leasing the space to someone paying less rent, but at least something.

One theory would explain the quandary in wages but not in real estate: People attach a lot of their personal identity to their paycheck, so while firing workers is traumatic, lowering everyone’s wages spreads the trauma to your whole workforce, hurting morale and making operations less productive. But landlords are supposed to be beady-eyed profit-mongers with an eye out for the main chance; they are not supposed to be setting rents according to how that makes them feel about their personal identity, rather than what the market will bear.

Another theory might explain the decisions of some landlords to leave their properties empty: Leases often run for a long time, so when landlords sign a lease, they give up some option value. In a rising market, or a gentrifying neighborhood, today’s rent might be X, but next year’s rent might be 1.8X, so if you sign a 10-year lease now, you will ultimately lose out on some revenue that you could have earned if you’d left the store empty for a while.

But Soho is already pretty gentrified. The Times article suggests another reason that landlords would rather have their storefronts empty. One that may also offer some clue as to why wages are so sticky:

But building owners who purchased their properties in recent years with the expectation that rents could only continue to rise may be in a bind. To secure financing, they would have to project a certain level of income, and if they accept less than that, they run the risk of being in default, or having their lender require them to put more equity into the building.

In other words, the landlords aren’t behaving irrationally; if it were an option, they would rather lease those spaces at a lower rent than collect nothing at all. But it’s not an option because if they sign those leases, they’ll trigger debt covenants that will cost them, even more, money than leaving the storefronts vacant.

And how does that explain sticky wages? Well, a lot of us are in similar positions to those landlords. We have promised our bankers a certain level of income, one that will enable us to meet our mortgage, our car payments, the interest on our credit cards. If we have borrowed right up to the limits of that income (as so many Americans do), then the difference between taking a 10 percent wage cut and losing our jobs may be financially insignificant. Either way, we’ll lose the house, or the cars, or default on our credit cards and end up in bankruptcy. So workers may be very, very reluctant to accept that wage reduction because even a small cut will be personally catastrophic.

This tracks with a psychological finding from Daniel Kahneman and Amos Tversky: People are much more averse to losses than they are excited about potential gains. They asked a group of students the following question:

Note that the expected value of the two options is the same. In the first scenario, you will save 200 people three out of three times; in the second, you have 600 people one time, and zero people the other two times.  Either way, over three trials, you’d average saving 200 people each time. But most of the respondents opted for the low-risk strategy.

Then the researchers switched the question:

The U.S. is preparing for the outbreak of an unusual Asian disease, which is expected to kill 600 people. Two alternative programs to combat the disease have been proposed. Assume that the exact scientific estimates of the consequences of the programs are as follows: If program C is adopted, 400 people will die. If program D is adopted, there is a one-third probability that nobody will die and a two-thirds probability that 600 people will die. Which of the two programs would you favor?

This is the same quandary; it just highlights the deaths rather than the lives saved. Suddenly, the majority of respondents became wild gamblers, willing to risk the deaths of everyone in order to avoid taking a certain loss.

Our debt has a way of focusing us on downsides because debt turns a continuous income curve into two discontinuous lines: “solvent” and “insolvent.” More generally, debt has a way of magnifying life events. When things are going well, debt can help them go better: You can buy a house and a car, or you can buy a bigger house and a nicer car. But when things are going badly, debt can turn a slight income loss into a major disaster.

Most Americans now have a lot of debt, whether they’re ordinary workers or commercial landlords. Which means that most Americans have to be extraordinarily sensitive about letting their income cross the line where they can no longer support their debt payments. Which in turn means that already sticky prices may become positively glue-like.

Previous Where U.S. Homebuyers Are Headed Next

Next Hudson's Bay Jumps on Report It's Reviewing Strategic Options

Attorney behind Capital One lawsuit: There are more suits to come

10 years later: Washington’s ups and downs since the recession 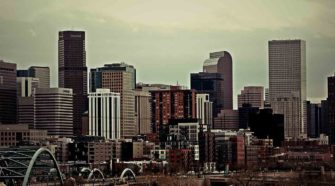 Watch this: DIA’s new hotel built in about 120 seconds